This is probably one of the most controversial books I have on here. In The Killing Joke Joker shoots Barbara Gordon and then takes pictures of her nude, wounded form to drive her dad, Commissioner Jim Gordon, crazy. That’s the crux of the controversy, that wounding of a healthy young girl solely to further the plot. It’s a dark story, and it was never meant to be canon, but someone decided to do away with Babs and her role of Batgirl (Joker of course did not know she was Batgirl, the attack was because of her parentage). She was later reintroduced as one of the best characters ever, Oracle, though they took that away with another reboot.

I’ve read all the theories about the ending, about what Joker and his henchmen did to Barbara, about the women in refrigerators and all of it. I list this book because at the time it left a large impression on me, and one that has evolved over time. I still like this book, but now as an adult, I can appreciate the intended and unintended nuances to it. 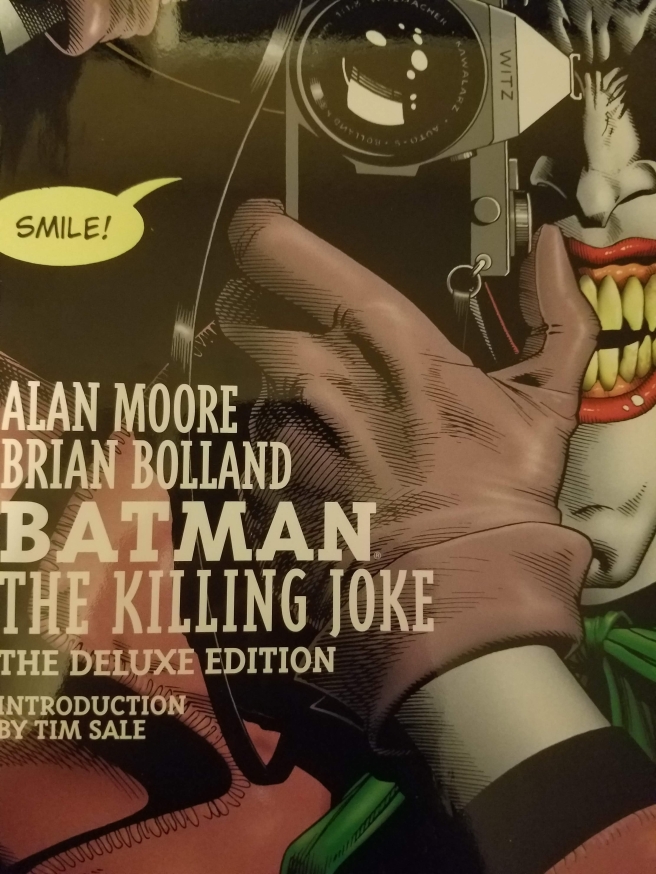 Those who know me in real life are probably surprised I didn’t put these first. I read Harry Potter and the Sorcerer’s Stone purely to see what the controversy was about. At that time the fourth book, Goblet of Fire, had just been released and there was talk everywhere about witchcraft and banning books and so forth. Naturally it made me curious. What I did not expect was a life altering experience. I finished the first book the day I had gotten it, I won’t lie, it’s a quick and easy read. However, I was hooked. I needed the next one, but all the stores were closed (the area in which I lived at the time, I think I was 26 or 27, did not have a 24 hour Walmart).

I was working a part time hourly job and living on sheer will power, but I bought the second book the next day. The day after that, I managed to get the third and fourth. After all, these were worth skipping a meal or two for in my opinion. After that I was there at midnight for each subsequent release and stayed up all night to read the new one. I still go back and read them. I read them to my wife when she was pregnant. I read them to my daughter when she was tiny. She just read them herself this past year.  You can see the wear on the spines in the picture below. These books are loved and cherished. 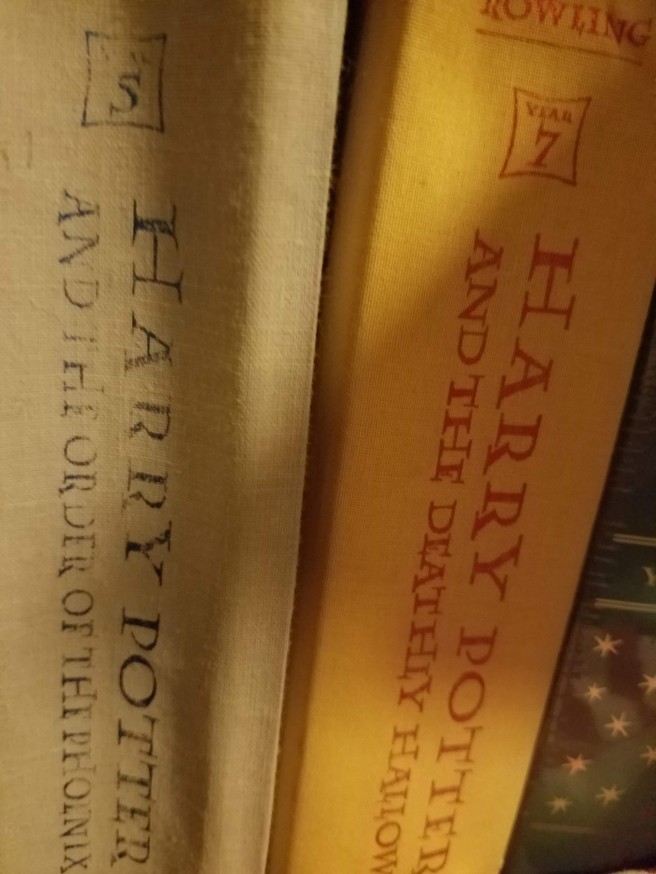 Several years ago DC rebooted their entire time line again. I quit counting how many times they’ve done this. However the 52 storyline introduced my new favorite DC comic character not created by Neil Gaiman. 52 gave us Batwoman, an out lesbian who is also Jewish with a strong military background. It was like a salve to a soul that had seen too much rebooting and whatnot in comics. 52 actually got me back in to them.

So I present Batwoman Elegy as my fourth installment of this ten book undertaking. It’s her first solo book and it’s written by Greg Rucka and illustrated by JH Williams. I have fallen in love with both.

Life intruded for a day. My apologies.

I really could not decide on this one. I have had a love for Neil Gaiman since I picked up my first Sandman comic 150 years ago, or the early 90’s if you want to be closer to accurate. One of my most prized possessions is an autographed Sandman trade paperback. I lost the full run, a few busts and statues and a framed Death print in Katrina. My wife found a copy of the first trade that collected the first several issues and gave it to me as a present. That’s what I have signed. It’s one of the first things on my list to pack if we need to evacuate.

Gaiman has a way of speaking to the soul. His writing is both wry and serious. He can insert humor in the most unlikely places, and every time I read something of his, I learn something. If I could be half the writer he is, I would be more than I can dream.

The second book is very much a favorite and one I try to reread every couple of years. Sometimes I’ll start with The Hobbit, but mostly I just start at chapter one and read through the complete Lord of the Rings. I know technically it’s considered three books, but Tolkien had written it as one and I read it that way. After all, who can read just The Two Towers without the other two? I certainly can’t. Even though LOTR is a gateway drug to fantasy and further to science fiction, I still need to keep it around.

Tolkien created a world I love to get lost in. I love everything about it, but don’t ask me to pronounce Elvish. I can’t do that very well. I used to have more editions and prettier ones than what’s pictured below (next to one of the two college textbooks I have remaining), but as long as I’m able to read it, I’m happy. 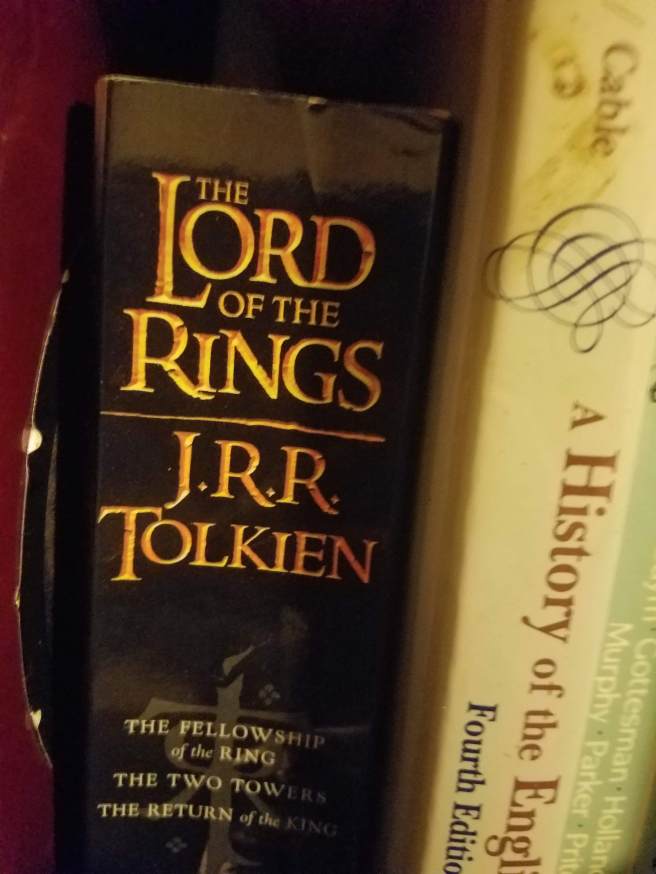 These are in no particular order, but since last month was PRIDE, I figured I would start with one that means a lot to the kinda scared, closeted kid I was when I first read it.

I first read Fried Green Tomatoes in the early to mid 90’s or about the time the movie came out. It was pretty eye opening for someone from a small town in Mississippi during the birth of Grunge. This book gave me Idgie and though there’s not a lot that we have in common, there are a few big things we share: disdain for women’s clothing and a love for Ruth being the two most prominent. It was amazing and the first time I had anything close to a real role model in print.

Fannie Flagg has grown a lot as a writer, but this book remains a favorite. It’s about friendship, love, and barbecue and it’s written in a nonlinear style. At 20 or thereabouts, it was everything I could have wanted in a book.

There’s this thing going around Facebook where people are listing so many books that personally touched them. I’ve really liked those posts as it’s very interesting to see what books friends have chosen. I decided to pick ten and share them here. As a constant reader as well as a writer, I appreciate the books that have left their marks on people, even if I didn’t always like them myself.

There are books that we love, that we visit again and again and these are the books I plan on listing. I have a separate list for scholarly books, books that I read through the course of school and still have feel the lingering effects of them. It’s the difference between best and favorite.

Starting tomorrow I’ll detail the list of favorite books. I’ll try to include pictures from my personal library when applicable. Some I no longer have due to natural disasters and moving and other events.

Two years ago the drought broke and I started writing again. I had not written in a long time, at least not consistently. In that time period, I’ve managed to finish three novels. I’ve just published the first to Amazon.

I had published three already, ones that I had written several years ago. I really did not care to much if they did well or not. I was testing the water mostly. This one though, I feel as if I just sent my baby off into the world. I’ll have very few ways of knowing if people like it. I feel almost the same as when I walked my daughter in for her first day of school.

Anyway, available now is Murders at the Lille Mansion. It’s a mystery. I have a sequel planned. Actually I have several parts to the sequel written, I just stopped it for Nanowrimo and finally finished that project. It’s now in final beta.

I recently got a one star review on Goodreads and I’ll be honest, it hurt my feelings a little. Then I thought back over the lesbian romances I had recently read and regretted and I was ok. I had to remember that not everything appeals to everyone. I’ve hated books that friends and family raved about.

So I’ve decided to put more effort into crafting a good story with strong characters and less about slapping some words down and being done with it.

I don’t know you, Ms. One Star, bit I really do thank you. Thank you for taking the time to read and leave feedback. Writers need comments like we need food, even the ones we find unpalatable.

Have fun and Be Safe.

Five or six years ago (I’ve lost my ability to tell time in the past tense as I’ve gotten older) my daughter and I had stepped outside the place we were living and noticed a Yorkie sitting in the driveway. I had seen the dog before, for the week prior I had caught glimpses of her during the torrential rainstorms. I texted my wife to bring bait and what ensued was about an hour of me, my wife, and our four year old playing catch that puppy.

I managed to catch her and she collapsed against me. She was shivering. She was covered in fleas and ticks. What really blew our minds was she was a full blooded Yorkshire Terrier and she had been fixed (she had the tattoo).

My wife of course was determined we were not going to keep her. We already had two shihtzus and we seemed to be feeding half the stray cats in the neighborhood.  However, our daughter fell in love with Millie. I took her to the vet and she was even chipped. That’s how we found her name. We never were able to contact the original owner though, we tried for days. Finally we stopped trying when we realized how devastated our daughter would be if the dog was claimed.

So since Easter is never the same day, we celebrate Millie’s found day on Easter Sunday. It was a little more poignant that Easter was the first after my mother had passed and Easter had been her favorite holiday. It seemed destined almost that we caught Millie that day. Now, years later, we wouldn’t have it any other way.